As part of their social action commitment, young people from our cohort with College of Haringey Enfield, and North-East London volunteered with an amazing youth club in the heart of London.

Coram’s Fields is based on the site of the London Foundling Hospital which was established by Thomas Coram in 1739 to look after unwanted children in the capital. It later became London’s first public children’s playground, and Coram’s has been doing incredible work in its current form since 1936 with young people from deprived neighbourhoods in Camden.

Each cohort member volunteered at least ten hours on the centre’s sports and youth work delivery, but many enjoyed themselves so much they stayed late and came in on additional days. “I had a great time playing (and beating) with the older and younger kids at basketball, “said Bilshan, 16. “And then I also enjoyed playing (and beating again) the adults at table tennis. So altogether it has been a very good day! ?” (Bilshan was one of three who were selected to go the Flip Out trampoline centre – see video below!) 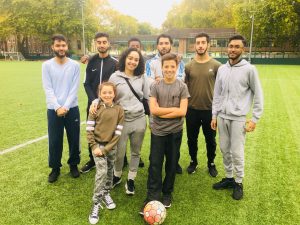 Tian, 18, has worked with children before but still found the experience new and rewarding. “Volunteering at Corams on Monday was a new experience for me as I’m used to under 8 year olds. It can be challenging working with kids but it’s definitely a good skill to have to be adaptable with all age groups,”

LTSB are grateful to Naz Deen and Ndiri Ndili from Coram’s for their help in organizing this – and we’re also pleased that not only are some of the young people continuing to attend the centre as service users, others are also going back as volunteers. The benefit on both sides is clear, as Nahum, 20, says: “It was a great experience for me. Interacting with the little ones, helping the staff and being an authoritative figure was great fun. I met some good people, the children are wonderful – so many smiley faces!”