Lord Pitchford served as a Lord Justice of Appeal in England and Wales. During his distinguished career he was Presiding Judge of the Wales and Chester Circuit from 2002-05. He became a Lord Justice of Appeal in 2010 and was subsequently appointed to the Privy Council. In 2015 Lord Pitchford was appointed chair of the Undercover Policing Inquiry by Theresa May when she was Home Secretary. Sir John Mitting took over this responsibility in May 2017 after Lord Pitchford had announced he would need to step down.

Lord Pitchford was a patron of LTSB since our inception in 2012 and was a great supporter of the charity and its cause.

He was a brilliant, kind and gracious man.

He will be missed terribly by his family and friends and by everyone at LTSB.

All of us at LTSB, and apprentices past and present, offer our sincere thanks to him for his invaluable contributions, and our deepest sympathies to his family and friends. 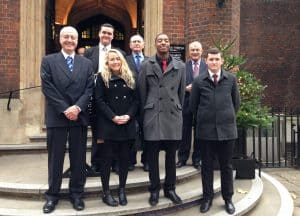 Lord Justice Pitchford is standing on the right, on the back row of the accompanying photograph, which was taken with a tour of the Courts of Appeal and a lunch at the Inner Temple he arranged for LTSB apprentices in 2014.